My paternal grandfather was quick witted, savvy in business, one of the first to be there to help– with a hammer, a hand, or the shirt off his back. He was a hero to his grandchildren and great-grandchildren, but most of all to his wife.

If you saw Gramps working on the farm, he was often wearing his work clothes; a green, long sleeved shirt with a pair of matching green pants, work-shoes/boots, and of course a baseball cap that was slightly askew on his head. 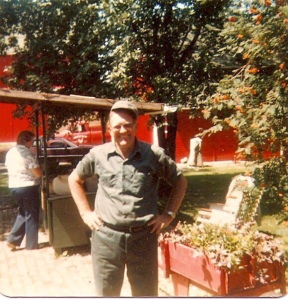 More than ten years after he passed away, I found a pair of those green pants along with a couple shirts, right where he had placed them after working on one of the family farms. I laughed hard when I put my hand in the pockets only to pull out some baler twine, a large washer, a couple nails, and some straw. Gramps was obviously keeping those items handy as he worked on a project.

Lately, I have been thinking about the conversations he and I had. I remembered the time I sent a letter to him and Gram, asking questions about their childhood, where they were at certain times in history, etc.

One of the last questions I asked him, was what did he want as his legacy. His answer surprised me. He said he wanted to be remembered for the history he knew and the things he would leave behind in the community. He had been a founding member of his town’s historical society and over the years he had been involved in many different parts of town, including his church.

It was the little things he left behind, that have had a lasting impact, like the items in his pocket. Drawing people together, like the baler twine held together the straw or hay.

He liked to make sure things were secure, like the washer would help hold a bolt firmly against the metal pieces it was joining. The nails would leave a lasting mark wherever they were hammered, even if removed, the mark would remain. Straw, which would make a place comfortable and safe for resting.

The legacies we will leave some day are not what we may expect.

Gramps’ name is in the historical society. Say his name in certain places and watch faces light up and stories start pouring out. Bring some of my family around and in less than an hour someone is telling a story about Gramps. He drew us together. He reminded us that when it came down to it, we were who were connected to, by name, by blood, by love, and by history.

Best Beloved, what do you want to leave as your legacy? Have you checked your pockets lately? Maybe it’s time to put your hand inside and see what little things you are carrying. It may be the very thing that makes a lasting mark.

Wife, mother, daughter, sister, friend. Writer, farmer, fellow sojourner... at every turn I learn a bit more about God's wild mercies.
View all posts by gretchenr17 →
This entry was posted in Walking by Faith and not by sight and tagged faith, family, farmers, Gramps, legacy, pockets. Bookmark the permalink.